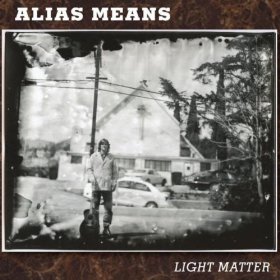 “Alias Means is a young singer-songwriter from California and he sounds like a runaway from the Geenwich Village late 1960s period, so a very strong comparison to Bob Dylan is easily possible to mention here. Of course we have heard this more than a few times recently, with as best examples Jake Bugg and the Llewyn Davis movie. However, Alias is definitely someone who might become the next big thing, because he is without a doubt a young man with a soul and a vision. Absolute highlight is the beautiful DYLANesque closing track “Thor’s scene.” Check out more on this on this upcoming talented musician (Points: 8.2 out of 10)” -Strutterzine

“Mr Means has a distinctive voice, obvious from the opening song on this album, with a slightly nasal quality that is something many a good country singer has. Delicate Mind unleashes the sound of a strident guitar and swirling organ which leads to Sleeves, a twang filled tale of regret. And so it is on the remainder of Light Matter a blend of country rock, unfrontness and obscure tales. But the way that Alias Means sings his songs allows for no mumbled phrases here. A sense of some Dylanesque surrealism is mixed with some straight down the line observation. His voice is such that it takes centre stage in the mix and gives this roots rock its character and cause.” -Lonesome Highway

“There’s more Country [to] offer from Alias Means, a Californian who voodoos up the mojos of Messrs Young and Dylan on ‘Light Matter’, a cast of seven supporting musicians adding flavor to his lonesome, lovelorn musical stew” -R2 Rock ‘n’ Reel U.K. Magazine

“Coming from the left side of the Americana ledger, where mix mastering and pushing the limits are the norm, this singer/songwriter has just the kind of skewed vision and quirky lyrics that people who like outsider music–that isn’t too outside–will love. With a pomo take on traditional country flavored lyrics, he could almost double as a comedian if he really wanted to. Alt.Americana for college radio? Could be.” -Midwest Record

“Listening to Alias’ CD has been a pleasure…He is a good singer-songwriter who is at ease with different kinds of styles…What I particularly like on these recordings is the combination between the so good melodies, his voice and the very, very good musical arrangements behind him (the steel on track 7 is a must!)…He is backed with talented musicians and we can hear it, believe me…” -Mike Penard, ISA Radio

“But for some artists, a Crispin Glover-like sense of quirk is simply their natural state of being, and that’s just the unique territory of Los Angeles’ Alias Means. Perhaps only an artist truly native to L.A.’s eclectic Silver Lake neighborhood could so readily manage Means’ somewhat illogical balance between quirk and heart.” -Independent’s Day Radio

“Like a breath of fresh air, the music of California-based Alias Means melds several different musical styles (and no little talent) with occasional wry humour to create a friendly pop-hinted sound.” -Americana UK